Actors Janhvi Kapoor and Ishaan Khatter have wrapped up the shoot of Shashank Khaitan’s Dhadak. The movie, an official remake of Marathi blockbuster Sairat, went on the floor in December last year. Then, Karan Johar shared a beautiful picture of the two leads, Ishaan and Janhvi from the city of lakes Udaipur to announce his project going on the floor and now it is Janhvi and Dharma Productions who have shared a photo to hint at the wrap of the film.

While the caption on Janhvi’s Instagram post only reads, “Home”, KJo posted an endearing click of the two actors and director Shashank with the caption, “The warmest trio at @DharmaMovies !! @ShashankKhaitan is truly the strongest guide…mentor…friend And above all director! Janhvi and Ishaan are truly the heartbeat of #Dhadak.” Ever since the film went on floors, several photos of Ishaan and Janhvi surfaced on social media from shoot locales and it was the camaraderie between the two actors which caught everyone’s eyes. Also, the stills of the movie hint at the intensity of love between Janhvi aka Pari and Ishaan aka Madhuk. The movie has been shot in the picturesque locales of Mumbai, Udaipur, Jaipur and Kolkata. 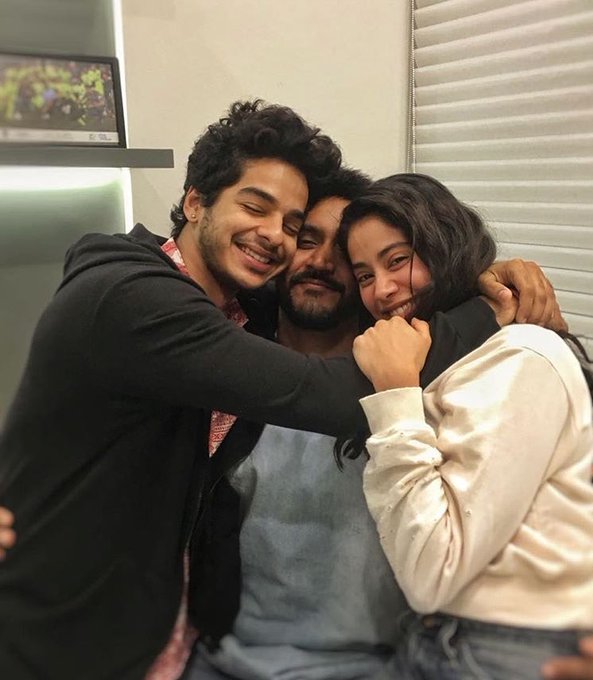 The warmest trio at @DharmaMovies !! @ShashankKhaitan is truly the strongest guide…mentor…friend And above all director! Janhvi and Ishaan are truly the heartbeat of #Dhadak

After the sudden demise of legendary actor and Janhvi’s mother Sridevi on February 24, it was being speculated that the debutante will take a break from work. But Janhvi returned to the sets as she didn’t want to delay the release of the film. Co-produced by Karan Johar and Zee Studios, Dhadak marks Janhvi’s debut in Bollywood. From what can be said after looking at the various photos, the cinephiles are up for some good cinematic experience when Dhadak hits the screen on July 20, 2018.

Farah Khan choreographed the new version of the song “Zinghat” with Jahnvi and Ishaan.

Janhvi Kapoor on the sets of Dhadak in Kolkata.

A still from the movie Dhadak.

Janhvi Kapoor and Ishaan Khatter spotted during the shoot of Dhadak.

Ishaan Khatter looks promising in this on-set photo of Dhadak.

Janhvi Kapoor has a stark similarity wth her late mother Sridevi in this photo from the sets of Dhadak.

Ishaan and Janhvi spotted clicking a selfie on the sets of Dhadak.

Ishaan Khatter in a still from Shashank Khaitaan’s Dhadak.

Sairat, a Marathi blockbuster starred Rinku Rajguru and Akash Thosar in the lead roles. While Sairat was a love story that was set against the backdrop of casteism in rural Maharashtra, Dhadak is based in Rajasthan.

Garima is following her dream and now writes on various topics about health, fitness, food, lifestyle, technology, latest trend full-time. Her favorite quote:
“A beautiful face will age and a perfect body will change ,but a beautiful soul will always be beautiful..”

WTF
0
WTF
Garima is following her dream and now writes on various topics about health, fitness, food, lifestyle, technology, latest trend full-time. Her favorite quote: "A beautiful face will age and a perfect body will change ,but a beautiful soul will always be beautiful.."

How to Recover Deleted Photos from External Hard Drive -...

Connect with:
Facebook Google Twitter
Back to
log in
This website uses cookies to improve your experience. We'll assume you're ok with this, but you can opt-out if you wish.Accept Read More
Privacy & Cookies Policy
Choose A Format
Personality quiz
Series of questions that intends to reveal something about the personality
Trivia quiz
Series of questions with right and wrong answers that intends to check knowledge
Poll
Voting to make decisions or determine opinions
Story
Formatted Text with Embeds and Visuals
List
The Classic Internet Listicles
Countdown
The Classic Internet Countdowns
Open List
Submit your own item and vote up for the best submission
Ranked List
Upvote or downvote to decide the best list item
Meme
Upload your own images to make custom memes
Video
Youtube, Vimeo or Vine Embeds
Audio
Soundcloud or Mixcloud Embeds
Image
Photo or GIF
Gif
GIF format